INVISIBLE / INVINCIBLE
A TICKET TO NOTHINGNESS
CURATED BY SARAH BELDEN

Curators Without Borders second season in Berlin opens this fall with a group show curated by independent curator and founder Sarah Belden. This exhibition, which explores themes of invisibility and invincibility, will include unconventional projects such as a stealth boat which is invisible to radar, a live talking Amazon parrot trained to repeat the mantra ”I am not a bird;” a color bath, in which the viewer experiences a shock of pure light and color; an invisible painting, which is left for the viewer to complete, STASI file-stones made from destroyed documents from the East German secret police, and finally an intervention, in which the artist has physically cut himself out of the system.

Exploring themes of invisibility and invincibility, this exhibition relates to two ideas; the idea of power as an invisible force and the power of the mediated image. We have great power today to make images that are truly spectacular. These images become so “real” however, that one forgets that they are not reality. This creates a shrinking possibility in the mind and imagination of the viewer. This steady diet of mediated images consumed on a daily basis is thus, replacing our reality. This has created not only a more distracted viewer but a lack of freedom of choice in terms of the consumption of these images. This has ultimately contributed to a shrinking of the human imagination. 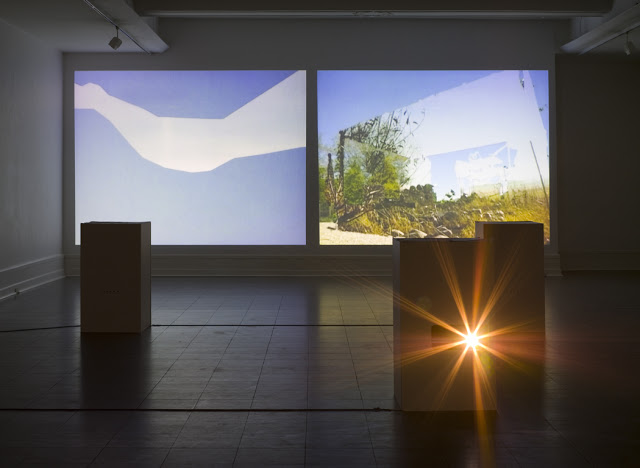 As a curator, Belden is interested in a reduction of this power within the confines of the exhibition space, as well as within the public sphere. This exhibition is meant to be an exercise for the viewer; taking the power away from the mediated images we are inundated by and putting this power back into mind and the imagination of the viewer. The value of an image was once determined by its’ mimetic function. The deep historical rupture of new reproduction techniques has started a new era of artistic practice, in which the attention has gradually shifted from the mimetic reproduction of the object of representation, to the reproduction of that which has been represented. Images no longer copy reality; they copy images. The aim of this exhibition is to remove the represented image altogether.

This exhibition also explores the idea of power as an invisible force. Invisibility is a form of power. If you cannot perceive the invisible, or if what is perceivable turns out to be invisible, how can you take it, hold it, collect it? How can you possess the idea?
The artworks on view examine both the mediated image as an apparatus in the dissemination of hegemonic power structures, and power as an invisible force that is able to manipulate, coerce and dictate public behavior based on the power of persuasion and suggestion. As Danish artist Niels Bonde has noted, “The high rate and extensive volume of imagery in the media might allow us to recognize what we see but leaves no time or space for us to realize what we see. If we relate to the information through mere recognition we reduce the events of the world to visual sensations, detach ourselves from the realities of the world and become easy prey for the manipulation tactics of ideology.” Within the public sphere of the media the truthful and untruthful have become invisible, and thus indistinguishable.

Specific works, such as Bondes’ videos based on news footage, or the stealth boat created by Peter Sandbichler and Knowbotic Research, thus become highly political. The artistically engendered act of perception reminds us of claims that have been made on the basis of technological images in order to justify recent political and military interventions. This highlights the problem of symbolic representations, which become more easily available and less controllable in the course of increased global interchanges. These artworks reveal chains of effects and interweave them with multilayered systems of communication, analyzing them in all their facets. Finally, the works in this exhibition aim to dissect the role that the mass media plays in shaping consciousness and poses questions about how media influences our sense of reality – socially, politically and culturally.