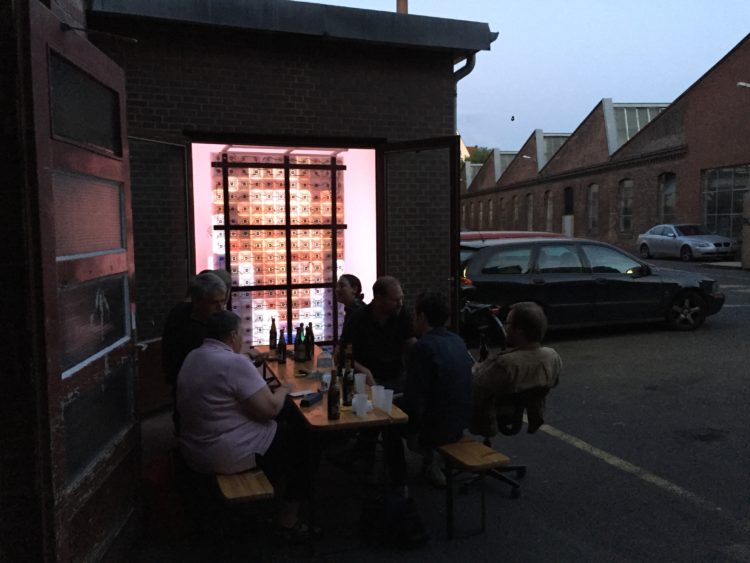 Surveillance. From 1992 I have been addressing the topic in installations and objects, but as the use of computers and cameras have become ubiquitous today, data collection is no science fiction or paranoid delusion. The exhibition is about surveillance based on very small amounts of data, like metadata and face recognition. In order to get a 95% sure recognition from publicly accessible image databases only 6×7 pixels are required. For comparison Facebook profile images are 960×960 pixels, which is 21,000 times more than necessary for this 95% secure recognition. And this data is forever.

The exhibitions center piece is a screen of a 160×243 cm screen of only 11×17 pixels showing a Mark Zuckerberg answering Senator (D) Dick Durbins question: ”Mr. Zuckerberg, would you be comfortable sharing with us the name of the hotel you stayed on last night?” with an embarrassed ”Ahhhmm … hehe… ehhhmmmm … no” and a headshake. Even though the video of Zuckerberg is extremely coarsely pixellated, it should be easy to make it a almost certain recognition. Opposite of the screen on podiums there are a group of tin foil helmets named after NSA surveillance programs. Quantum Theory, Treasure Map, Packaged Goods, Genie, Cult Weave, Traffic Thief, Fallout, Boundless Informant, Egotistical Giraffe, Evilolive are only some of the fantastic names that the NSA programmers have thought up for the spying programmes.
And it’s not only Facebook and Google we’re going to keep a close eye on, developments in Russia and China are far ahead.
”In a seemingly ill-timed reintroduction, Facebook resumed asking European and Canadian users for permission to use its facial-recognition technology. The social-media firm, under fire for breaches of privacy, is keen to re-deploy an algorithm that identifies people in pictures and tags them automatically, without their explicit permission. Facebook had promised European regulators it would drop it in 2012.” https://www.cbsnews.com/news/facebooks-facial-recognition-system-why-its-scary/
The russian identification app FindFace can identify random passersby with about 70 percent accuracy, given two conditions: You need to snap a photo of them, and they need to have a social media profile. “If you see someone you like, you can photograph them, find their identity, and then send them a friend request,” Alexander Kabakov (29), who created the identification app FindFace with Artem Kukharenko (26), told the Guardian in an interview. “Alternatively”, he said, “you can run a photo of an ex or celebrity through the program, and FindFace will spit out the social media profiles of similar-looking people”. https://www.washingtonpost.com/news/morning-mix/wp/2016/05/18/russias-new-findface-app-identifies-strangers-in-a-crowd-with-70-percent-accuracy/
“In China, law enforcement agencies have been using advanced biometric technology to track citizens for years. These technologies are part of a coordinated national effort to create the “omnipresent, completely connected always on and fully controllable” video surveillance network envisioned by the Chinese Ministry of Public Security in 2015.
Emblematic of this unprecedented surveillance apparatus are the facial recognition devices deployed in Shenzhen that are meant to deter jaywalkers. These devices take photos of offenders and display them on large LED screens above the intersection, along with their name and part of their government ID number.” https://motherboard.vice.com/en_us/article/wj7n74/china-jaywalking-facial-recognition-camera
The exhibition is a call for digital resistance.