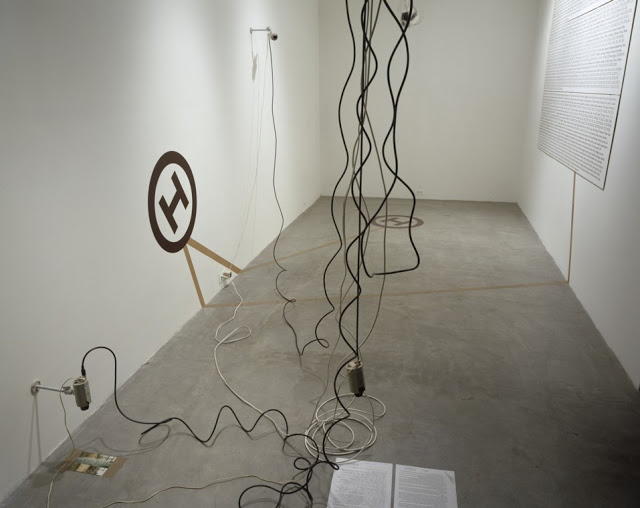 “Bonde’s representation of surveillance explores the obsession of watching. It makes us pay attention, but doesn’t attempt to reconcile the many contradictions, suggesting, rather, that surveillance –watching –is a reciprocal relation, that implies to be under watch and to watch, but also to be watchful and to be watched”. Maia Damianovic, New York 1999.

The effects of immersion within a society in which watching and being watched have become paramount to its functioning, economically. In Niels Bonde’s recent work he takes the very tools of surveillance and makes the subject matter. Diagrams for the electronic equipment of spies has become the aestetic images. These intricate diagrams that are getting an ornamental quality and beauty, as well as they as content, have a sinister meaning: their potential uses. One diagram is for triggering bombs from a safe distance, another is for bugging phones. These diagrams are from the books “Minispione I-IV” (print Stuttgart West Germany 1969).

“It evokes an uncomfortable moment between vigilance and angst, when our fear cannot be precisely located, and when we don’t know where the clear and present danger is, although we are prey to latent apprehensions” (MD). This nightmare of total control, in which even your private sanctuary the home has been sullied with surveillance devices, is no fiction. Is it paranoid to suspect that the devices infiltrated the home at the harnds of corporate agents wishing to demographically profile your every preference, desire, and action? 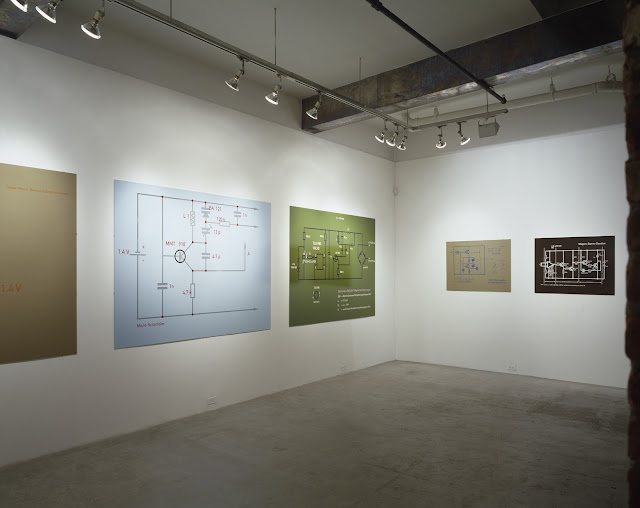 Surveillance of any kind is inherently ambiguous. By nature it implies a certain stealth and underhandedness that another work by Bonde points to. “Trigger” is a list of words from a piece of software in the Echelon surveillance system, run by USA, UK and Australia but also on european ground. This filters all electronically transmitted messages, for use by military as well as industial intelligence uses. This is factual, but then the rumour begins to get a life of it’s own, and this list of words to trigger the system is circulated around the internet as a fact, and this list serves as a map of current paranoia.

Manipulations and reconnaissances, surveillance is something culture and everyday life foist on us, but it seems as if reality is taking giant steps towards making this even more pervasive. But at no time, does the artist give way to pretensions of clarifying this jumble of concerns, preferring, instead to reveal a story directly, almost neutrally without passing a judgment, as if acknowledging that the rules of the game are always more complicated than we think.

And, indeed, surveillance systems, high-tech reconnaissance, genetic mapping, browsing on the web, have spread everywhere, fraying the edges between public good and loss of freedom, individuality and categorization, utopia and dystopia.